History of The Fair Giant 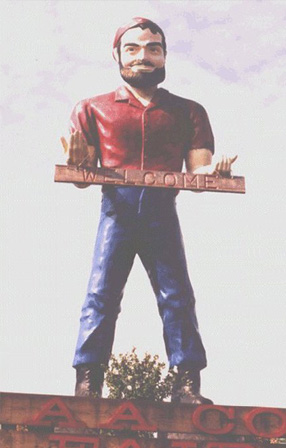 The Fair Giant as he stands at the Anne Arundel County Fair in February, 2009 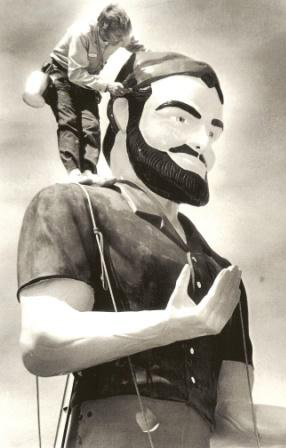 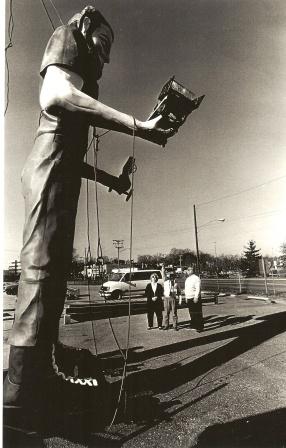 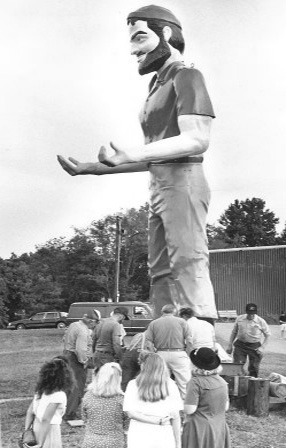 The Fair Giant being bolted down and secured. 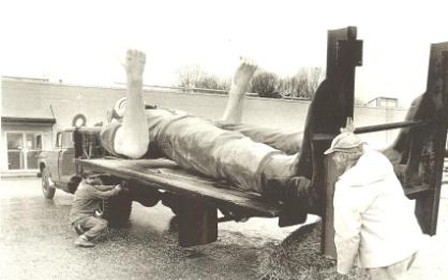 Mike Crutchley & Claude Donaldson loading up the new Fair Giant in front of Baldwins to the fairgrounds. 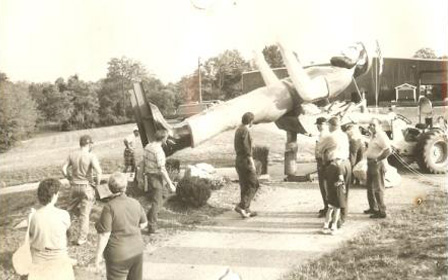 The new Fair Giant being lifted to his new resting place.

Uncle Harve, the giant lumberjack from the roof of Baldwin Service Center, has become a free agent. After a reign of 22 years at the corner of Defense and Generals highways, he was lowered to the ground Friday. Harve began life traveling to county fairs representing a chain saw company, but then was traded to the Baldwin family. Baldwin’s is still open, selling its final inventory and fixtures before clearing out for a new Toys R Us. Anyone interested in acquiring Harve can contact Rhoda Baldwin about a possible cash deal.

Legend has it that Paul Bunyon could fell a forest with one swoop and used a hotcake griddle so large that men greased it by skating across it on slabs of bacon. Last week, it took five men most of the afternoon just to move the county’s own replica of Paul Bunyon, a giant lumberjack which has stood atop the Baldwin Service Center for almost 15 years. A familiar sight to Annapolis, The Baldwin family donated the 20-foot lumberjack to the Anne Arundel County Fair when their store closed last fall. On Friday, he was carted gently to the county fairgrounds in Crownsville, where he will be repaired and painted before taking his place at the entrance to the fair “We’re real pleased to have him. It will be a nice addition,”said fair President Fay Baase.

Made of steel and fiberglass, the huge lumberjack originally traveled from one fair to another, representing the Lombard chainsaw company. In 1977, he was sold to Frank Baldwin, owner of a farm and garden supply company at Route 50 and Generals Highway. That year, Mr. Baldwin carted the figure to the Anne Arundel County Fair at Sandy Point State Park but enroute, he fell off the truck and broke his arm.

The next year, the giant took his place atop the Baldwin Service Center at Route 50 and Generals Highway, where he remained for almost 15 years. Mr. Baldwin nicknamed the statue “Uncle Harve” in recognition of International Harvesters. But area residents knew the big lumberjack primarily as Paul Bunyon. “It’s a little hard for us to see him go,” said Rhoda Baldwin, who recalled that people came from miles around just to look at the figure.

The kids loved him. There he sat, looking down at the world. Last summer, Mrs. Baldwin decided to close the service center after nearly 45 years in business. She put the lumberjack up for sale and received several offers, but new county zoning regulations prohibit business owners from displaying the statue in front of their stores.

The Baldwin family eventually decided that he belonged at the county fairgrounds and donated him to the fair’s organizers. On Friday, five volunteers gathered at the service center to move Paul Bunyon to Crownsville, where he will be spruced up in time for next year’s event.

Using ropes, blankets and a front-end loader, the men worked for hours to weld the figure to his stand and then lower him onto a flatbed. Fair organizers hope to eventually place him at the entrance to the fair and place a sign welcoming people in his outstretched arms.

The Fair Giant was put in storage in the Exhibit Building and painted by the Busy Beavers 4H Club. A platform was built with telephone poles and heavy lumber for him to rest his feet on. With a back hoe and volunteers, he was then moved to the triangle shaped garden at the entrance into the fair. Bales of hay laid in the bucket of the back hoe to help protect his back. Ropes tied to his shoulders to help steady him. He rose slowly up as they pushed him from the back. There he stood, 20 feet tall with his arms extending out to hold a WELCOME sign to greet the Fairs patrons.

Thanks to all the volunteers who helped to make this landmark a reality!

The Fair Giant is also called a Muffler Man. Visit Roadsideamerica.com for more informaiton on other mullfer men or go directly to the links below.

Maryland Muffler Men – http://www.roadsideamerica.com/muffler/list.html#md
Maryland sightings have been in Harve de Grade, Marion, Ocean City and of course here in Crownsville. Muffler Men have been seen all over the United States.

There are many avid Muffler men collectors of sighting of these big guys. Once we had a motorcyclist ride in just to snap a picture of him… Said he was out for a Sunday ride and thought he would search out our Muffler Man.

2001 – The Giant had three bulletin boards built at his feet for an eagle scout project and the flower garden was landscaped with lumber donated by Garman Bros. of Crownsville.

Visit our Fair Giant when attending one of our Anne Arundel County Fair sponsored events listed on our web page.